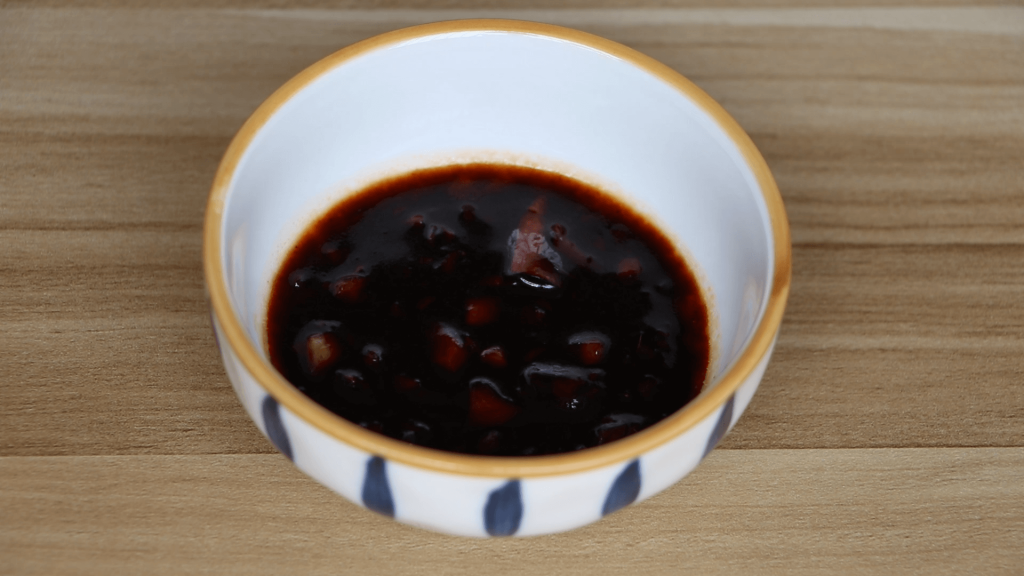 After the short description about this sauce below, we will start the real travel to make it at home. If you don’t want to know the story behind it, just skip it and scroll to the how to make this sauce from scratch parts. We provide the most easiest method (step by step and youtube video) to help you to make the best sauce.

What Is General Tso Sauce?

You must have been wondering how such a complicated name to describe a sauce came to be. Originally, the sauce was used in another Chinese takeout dish, the General Tso’s chicken. The name, General Tso, originated from an ancient Chinese leader from the Qing dynasty known as Zuo Zongtang. His name was Romanized to Tso Tsungtang. 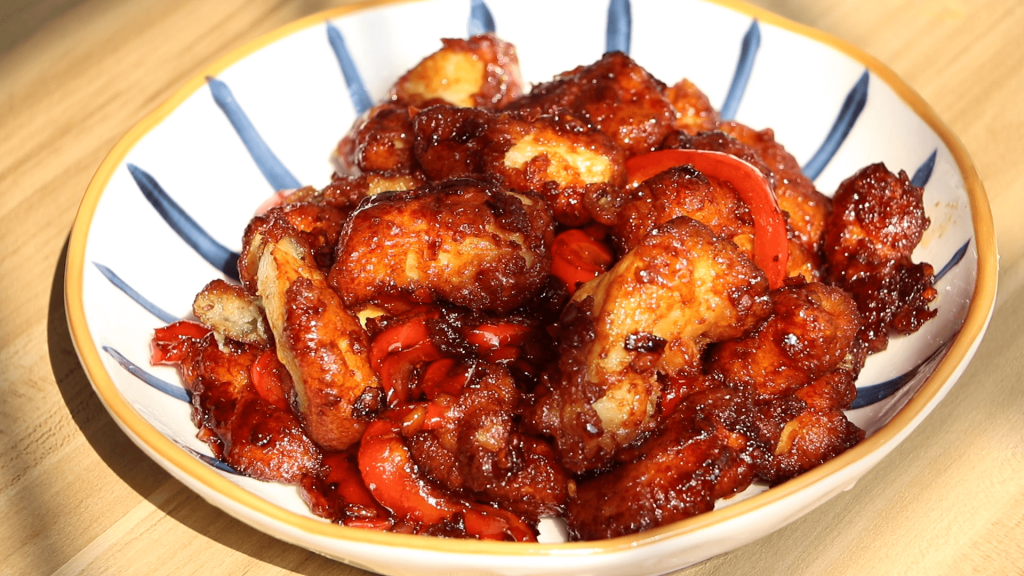 A story is told of a chef in a certain restaurant, Chef Peng, who invented the dish and the sauce in his restaurant in Taiwan. The uniqueness of the sauce made the prowess of the cook to spread, and after a short while, it became the talk of the city. It was later named after Tso. The fame of the sauce did not stop at that, since it spread to the English nations. Through this, there have been several modifications in the sauce. Partly this was caused by the Americans who tweaked theirs to be a little bit sweeter, unlike the original version which is hot courtesy of the Hunanese influence.

You should prepare all of the materials before you make this sauce. You can jump to the end to see the recipe that provides the detail ingredients. But you also see the steps below first and prepare your materials in when you want to make this sauce. Every step we recorded the detail for you, you can click the play button to play the video to see the action. You also can see the whole video which from make the sauce to use this sauce in General Tso’s chicken in our youtube video, just click the see it. If you like it, remember to subscribe us.

First of all, Reduce 4 dry red pepper to several parts. Then clear pepper seed which will cause bitter taste and take more peppery taste.Pour some water into the pan and boil it. After that, add the dry red pepper to pan. Cooking it for at least 30 seconds. It can help dry red pepper to keep its color and won’t become black. 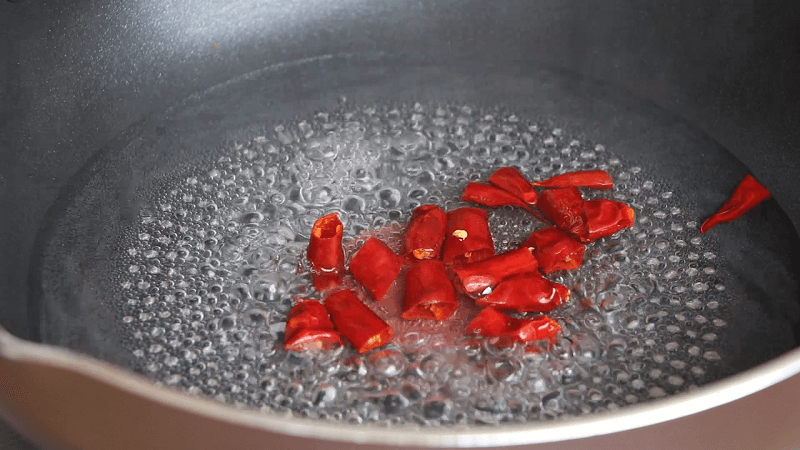 It’s a very useful tip which can help you to cook the dry red pepper.Take it out for draining and set aside.If you don’t care its color, you can ignore this step. 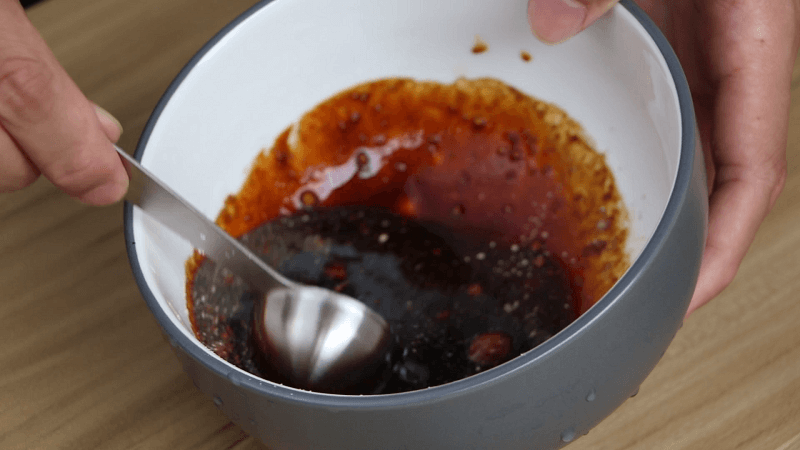 Step 3: Chop Garlic And Ginger To Be Ingredient

Chop two cloves of garlic and some ginger. 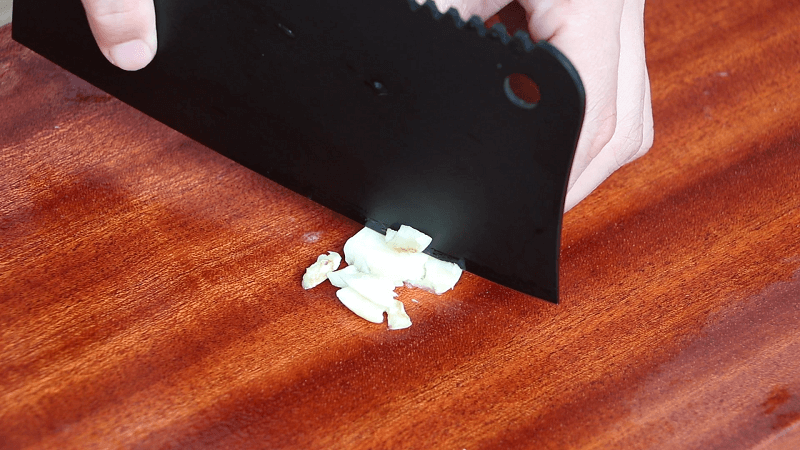 Chop Garlic And Ginger To Be Ingredient

Sometimes we would like to choose some pepper or tomato to beautify the General Tso’s Chicken. In fact, it should be added when cooking the chicken. But if we just want to make General Tso Sauce and store it for future’s use, you can precook it in the sauce. 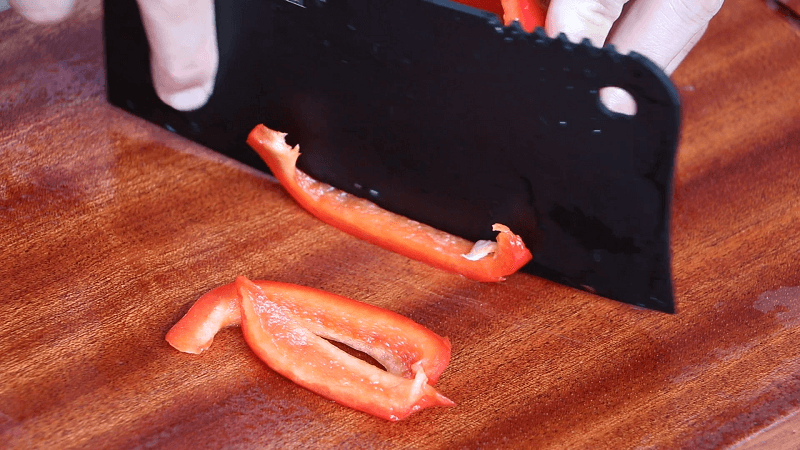 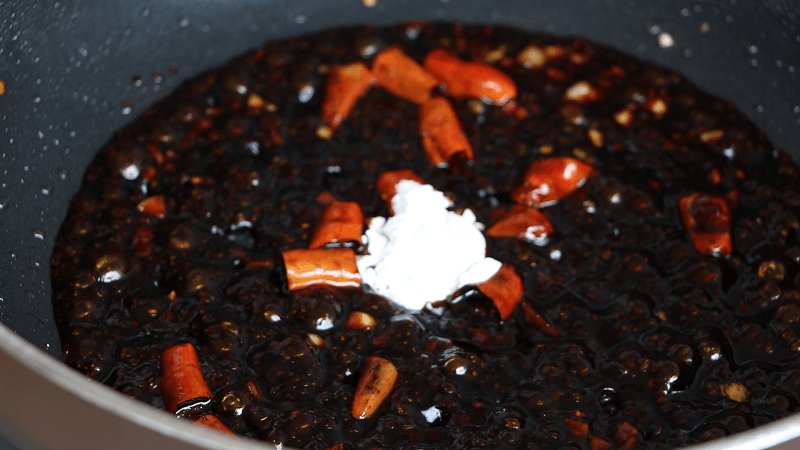 If you don’t want the dry red peppers, you can clear them from the sauce.If you just want to make the sauce, you have got the right process. But if you want to continue to cook the General Tso’s Chicken, please keep following our step. 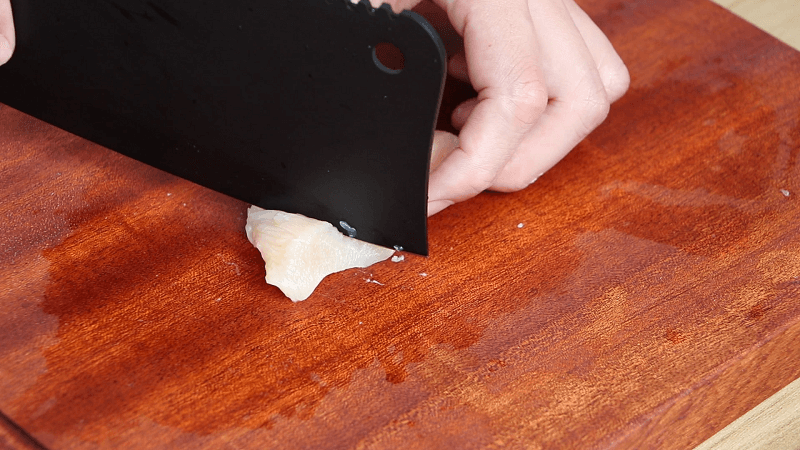 Whisk one egg and stir it enough. We’ll need it in some future steps. 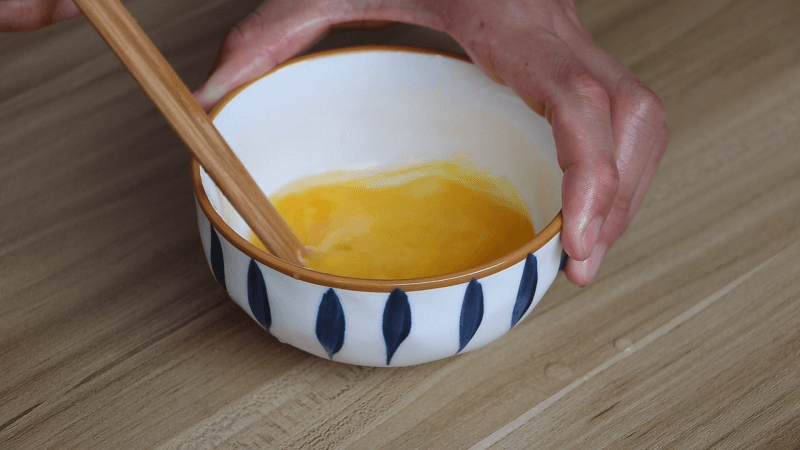 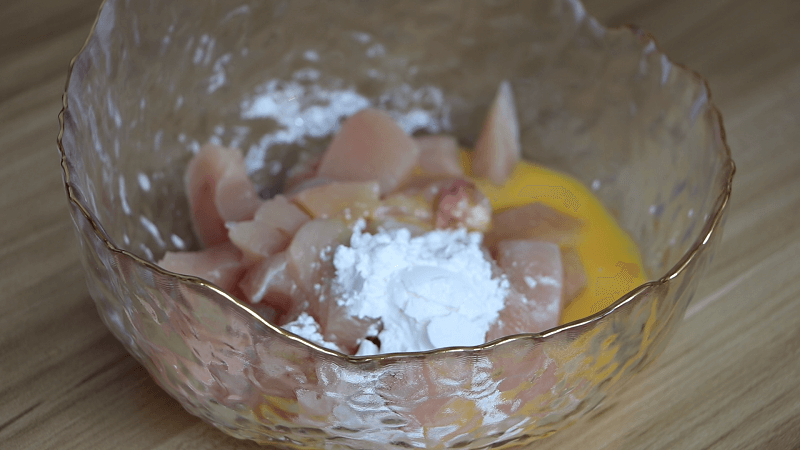 After that, let the mixture lay down for 10 minutes.

Add 3 tablespoons wheat flour, 1 tablespoon cornstarch, 1/2 egg mixture, 1 teaspoon baking powder, 4 tablespoons water to combine. Add 1 tablespoon olive oil to the batter that help it has a great gloss.You should see the fine consistency in your batter. Just likes this in our video. 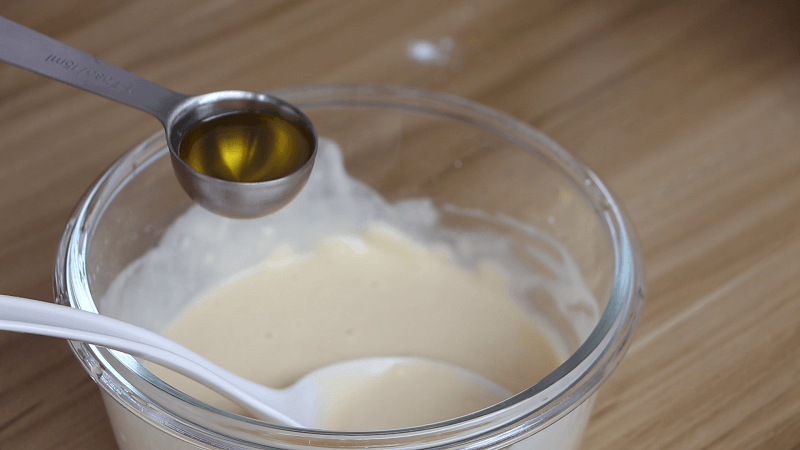 Pour more corn oil into the pan. The dose is depending on your pan. We can give you an easy way to help you to find the appropriate level: just immerse the chicken block.

Heating oil to the right temperature. We also can give you an easy way: put a drop of water into the pan, if it floats immediately that represent it hot enough. 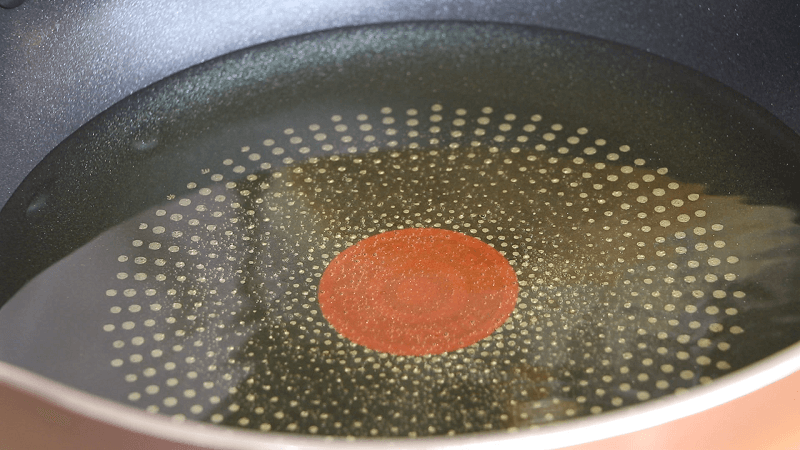 Don’t put all of chicken into the pan once which will lower the oil’s temperature and it will all stick together. We should set the chicken in the pan piece by piece.

If the oil’s temperature become high, you can reduce the power of the fire of your device or even close it. Fry it for at least 10 minutes until it turns yellow. 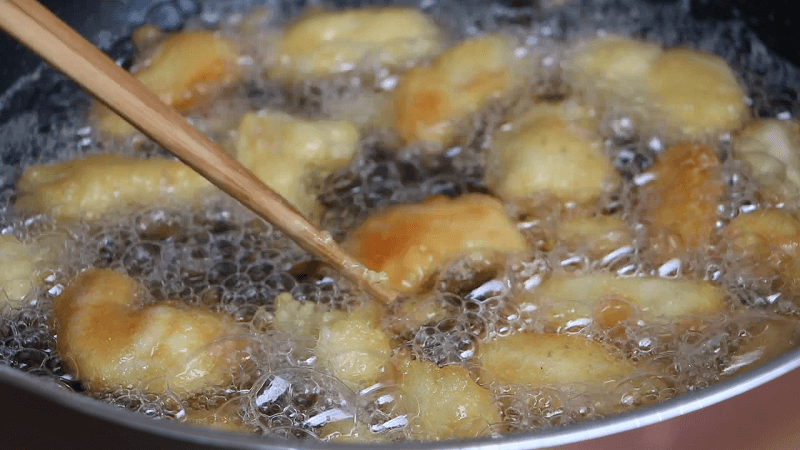 Remove chicken from the first deep fry and wait for the second one. 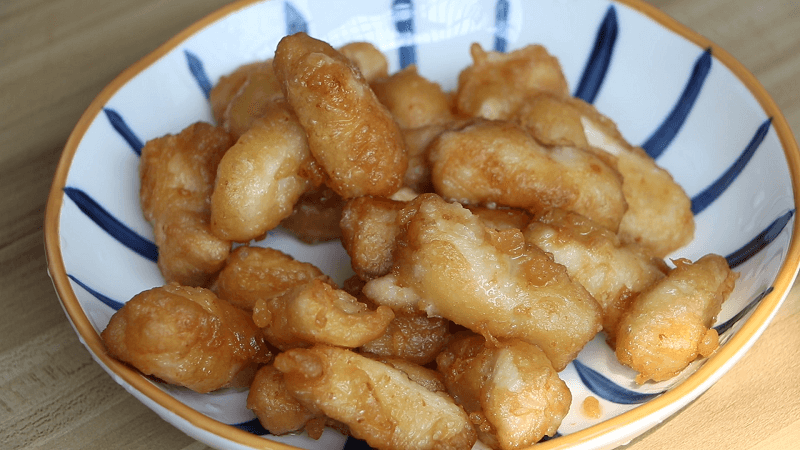 Heat the oil to the proper temperature again and pour slowly all of the chicken into it. The oil is very hot and we should utilize turner or other things slow the action. You don’t need to fry too long for the second deep fry. Just about 2 minutes. The second fry can help the chicken’s skin become very crunchy. The first fry is 300F(149 °C) and second fry is 350-400F(176 °C-204°C). 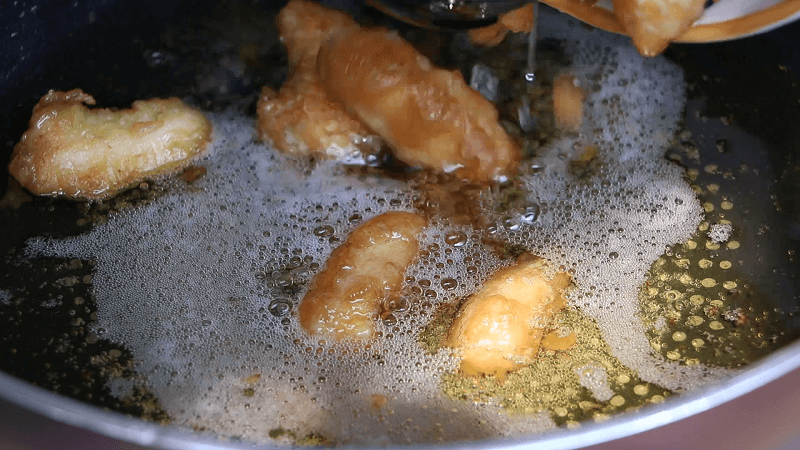 If you don’t want to cook the General Tso’s Chicken immediately, you can also put it into the refrigerator with the sauce.

Step 14: Mix Sauce And Chicken To Cook In Pan 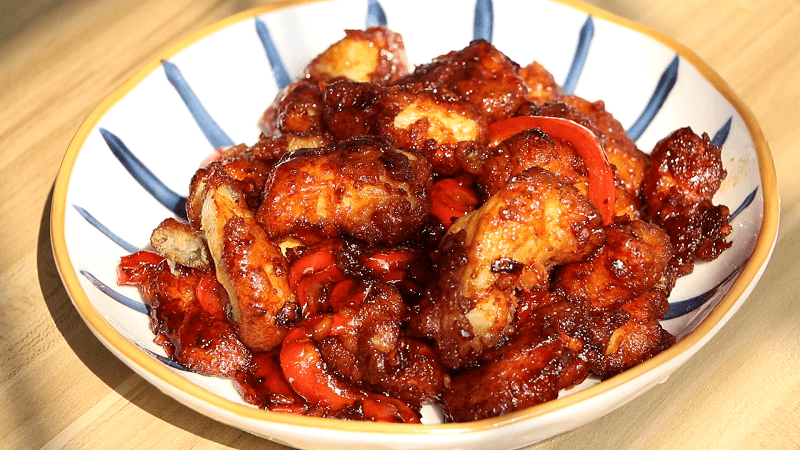 Mix Sauce And Chicken To Cook In Pan

Tips On Ingredients In This Sauce

The main thickening agent in the ingredient list is the cornstarch. Adding the cornstarch to the other ingredients and heating the pot for a while does the trick when it comes to getting a more desirable consistency. Apart from that, white and brown sugar also caramelize, and in the process make the sauce thicker. However, you must watch out on the use of cornstarch. Most people usually underestimate the required content when preparing the sauce. Don’t forget that the actual thickening occurs when the cornstarch is heated. If you expect that you will add the cornstarch until it is sufficiently thick, you may end up with a rude shock as the sauce may end up becoming a paste. For this reason, use controlled amount of cornstarch powder. You can always add more if you have heated for the recommended duration yet you have not achieved the target thickness.

Also, worth noting is the fact that wheat flour can also be used as an excellent thickening substitute. You don’t have to worry if you run out of cornstarch powder while you are mid preparations.

Chinkiang vinegar is a great substitute to rice vinegar. Scallions can be used for fragrance. If you can’t get hoisin sauce, you can use sriracha and barbecue sauce as an alternative.

How To Store The Sauce?

Unfortunately, while most people can make pretty good homemade general tso sauce, poor storage makes it lose its rich flavor fast. As a rule of thumb, you should store it in a refrigerator is you have an excess. That way, you can use it up to three weeks. On the same note, if you want to use it after a longer duration, say three months, you can choose to keep it frozen. you can choose to keep it frozen

Does The Sauce Recipe Have Rice Wine?

Is The Sauce Vegan?

Yes, the sauce is vegan. But if you use it in the chicken recipe, it is not vegan anymore.

Is The Sauce Spicy?

Is The Sauce Healthy?

Yes, but if it uses in the chicken recipe, it won’t be healthy. But we choose the chicken breast which can be healthier choose.

Does The Sauce Have Peanuts?

That’s our today recipe about the General Tso Sauce and Gerneral Tso’s Chicken, hope it can help to cook the wonderful recipe. If you have any problem, please let me know. 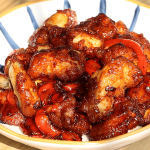