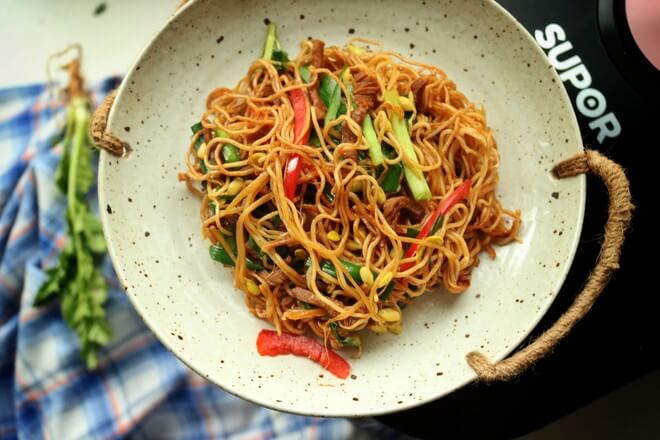 I think the stewed noodles are very suitable for working people. They have meat, vegetables and staple food, and they can be eaten quickly and can be eaten in half an hour. It’s delicious and full of satiety. It can quickly replenish energy.A plate of stewed noodles with a bowl of tomato and egg soup is a classic match. It is especially satisfying to eat soup while eating noodles. Her husband is a deep-fried noodle stewer. For him, as long as the noodles are braised for lunch, everything is OK. So my family often cooks noodles, almost every week. Recommended for office workers.The stewed noodles made with the rice cooker is simply an artifact.

How to make braised noodles with shredded pork

Let’s make the noodles first. I used a long whisk noodle die. The braised noodles are the most suitable for thin noodles and round ones. I use an automatic noodle machine to make noodles. I can also roll them by hand, or just buy fresh noodles. The noodles may vary from region to region. The prepared noodles are ready to be used. Don’t cut them too short. Longer ones are more suitable for braising noodles.The noodles can be prepared on the weekend, and then frozen into 1 serving. It is convenient to take it at any time when eating, and you don’t have to be so rushed on weekdays. 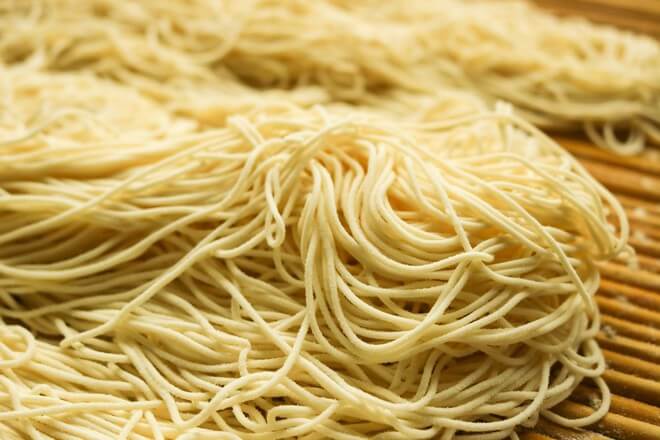 Shred the tenderloin, don’t make it too thin. Add the water starch, chicken powder and a little oil to the shredded pork. Mix well and marinate for 20 minutes. The marinated meat will be tender and tender. 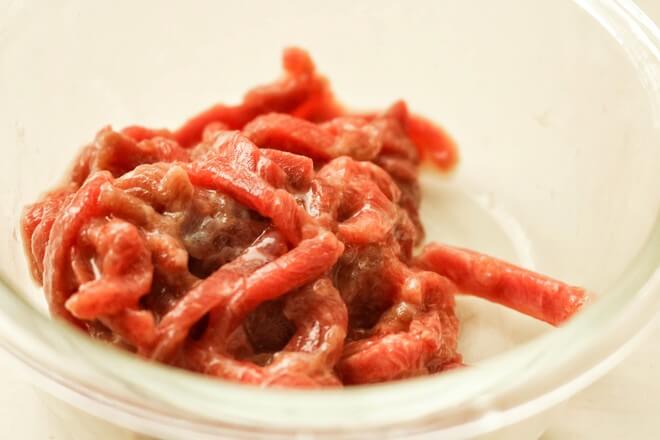 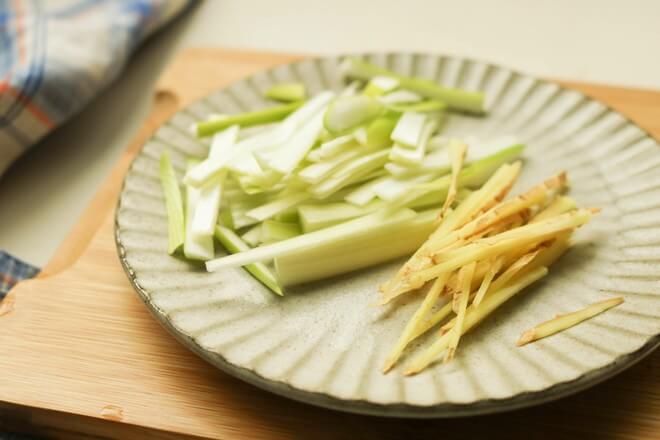 Shred the red pepper and wash and cut the leek. 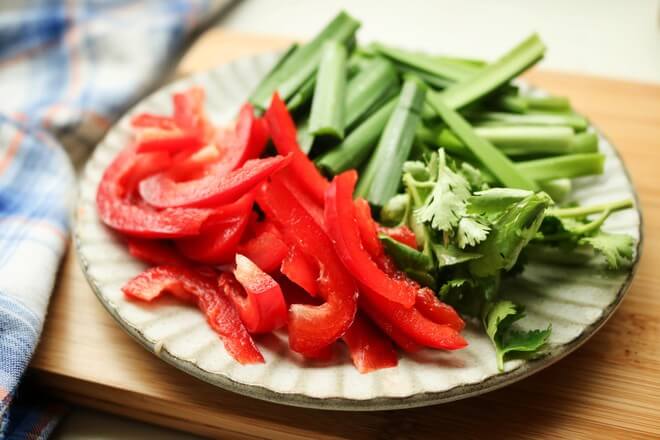 Shred the red pepper and wash and cut the leek.

Start braising noodles. The rice cooker can choose the cooking function, or just one function. After opening for a while, the liner will become hot. 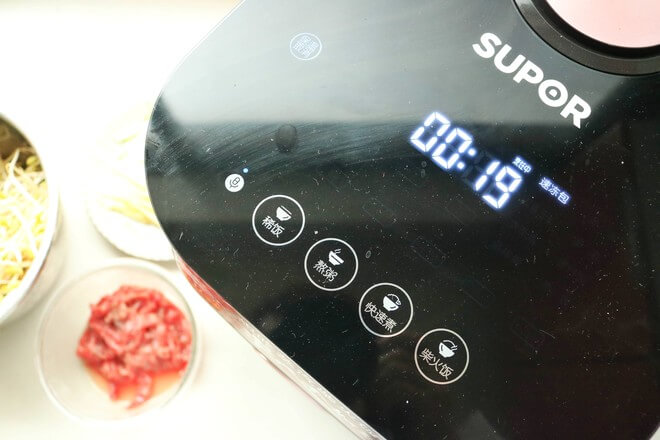 Add some salad oil, stir-fry scallion and ginger after cooking, then add the marinated shredded pork. 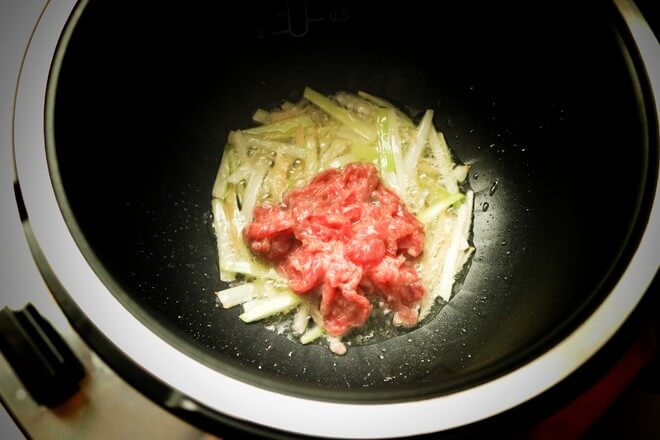 Add some salad oil, stir-fry scallion and ginger after cooking, then add the marinated shredded pork.

Continue to fry, after about a few seconds, the shredded meat changes color. 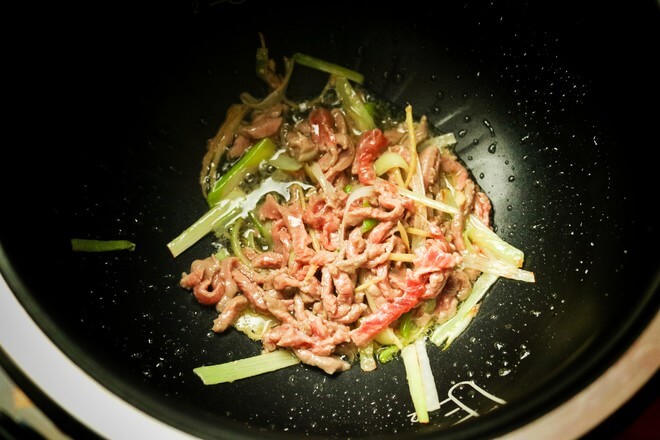 Continue to fry, after about a few seconds, the shredded meat changes color. 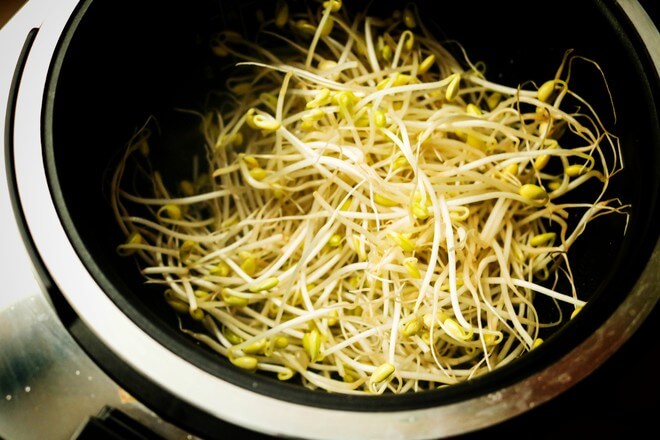 Add the seasoning and stir well with the bean sprouts. This step does not need to be cooked, because there will be a simmering process later. Add some water to the stir-fried vegetables. Do not cover the vegetables with water. After adding water, sort out the vegetables and smooth them out. 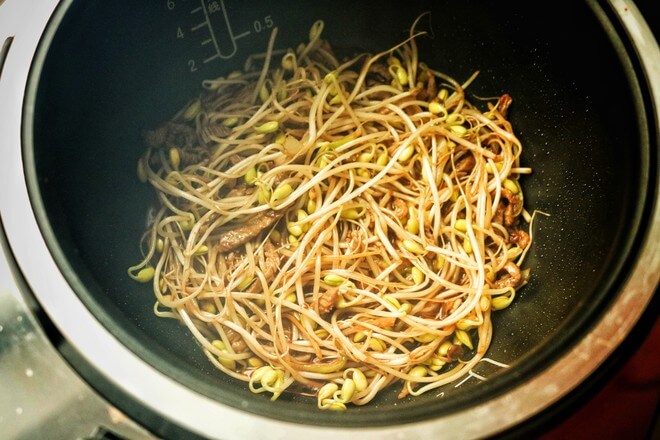 Add the seasoning and stir well with the bean sprouts.

Lay the noodles, leaving some gaps in the middle, so that the water vapor can be quickly emitted, so that the whole noodles are heated evenly. 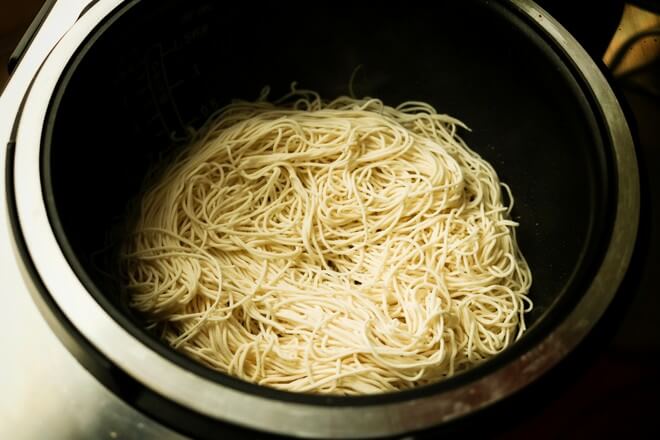 Cover the rice cooker and simmer for another 15 minutes. I used the quick freeze package program, the time is 20 minutes. If your rice cooker does not have this program, you can directly eat rice stew function, you can control the time. 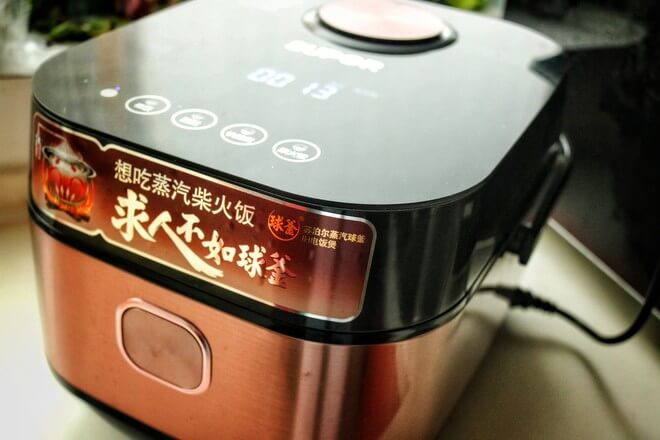 Cover the rice cooker and simmer for another 15 minutes.

When the remaining 2 minutes, open the lid and put the sliced ​​red pepper shreds and leek segments. At this time, you don’t need to cover the lid again. Opening the lid can still maintain the bright colors of the vegetables.

When the remaining 2 minutes,

Mix the noodles evenly so that all the noodles are colored. At the beginning, the noodles at the bottom are darker in color. The ones above have no color because they are not exposed to the dish, but it doesn’t matter. It will be even after mixing for a while. 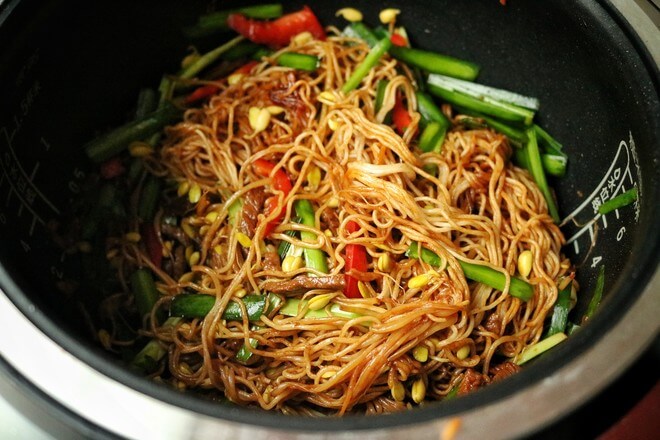 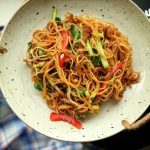 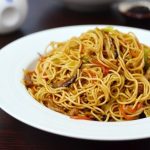 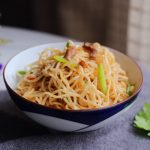